The new fifth building, where the adidas Group is moving, was designed by ABD architects (together with Scott Brownrigg). The building was commissioned in the II quarter of 2015.

In addition to the office, one of the floors will be for "Academy of adidas", as well as modern fitness center. Adidas Group moving to "Krylatskie Hills" is planned for the II quarter of 2016.

Business Park "Krylatskie Hills", part of which is a new building, built in 2006, also designed by ABD architects (together with NBBJ). The tenants of the business park are international corporations, including Microsoft, Intel, Colgate, Johnson & Johnson, British American Tobacco, and more. 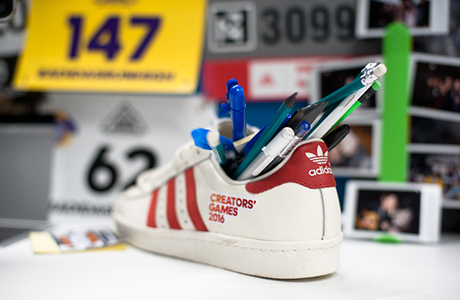 27 february 2015 NEW OFFICE FOR NAVIGATOR
ABD architects have developed solutions for the architectural design and interior decoration for the Navigator office, located at the address: Moscow, Andropov Prospect, 18, bldg. 5.
12 march 2015 NEW CO-WORKING MEETING POINT
When designing the interior for Meeting point coworking we tried to make it comfortable, efficient and modern.
17 march 2015 ABD ARCHITECTS SHORTLISTED IN INTERNATIONAL COMPETITION
The first stage of an international open tender for the development of the architectural design for the Pavilion of nuclear energy on the territory of VDNKh has now ended.
Sport IT Business centers Moscow Office interior