INTERIOR "FROM THE PLANE TO THE VOLUME" FOR TETRA PAK

One of the 3 reconstructed floors of the Tetra Pak office opened its doors last week. The project of a complete reconstruction of the office meant re-planning (with the preservation of the old furniture), as well as replacement of engineering communications and lighting. One of the main ideas of the design of  ABD architects is the interpretation the company's main activity related to packaging in interior.

Sofia Tkach, chief architect of the project: "We called it" from the plane to the volume. "Unusual solutions for carpeting, ceiling slabs and graphics on walls and columns support this idea and represent the stylized development of Tetra Pak packages."

The author's matting is done, which is tied to the shape of the glass partitions themselves, and passes to the doors and walls. This is a graph of the famous tetrahedron, patented by the founder of Tetra Pak in 1952.

The office was planned as part of the first step towards an activity-based office concept, to which the company is moving globally. A significant number of small meeting rooms were organized, an informal communication and brain storm zone was created, hot desks and small telephone booths were organized. 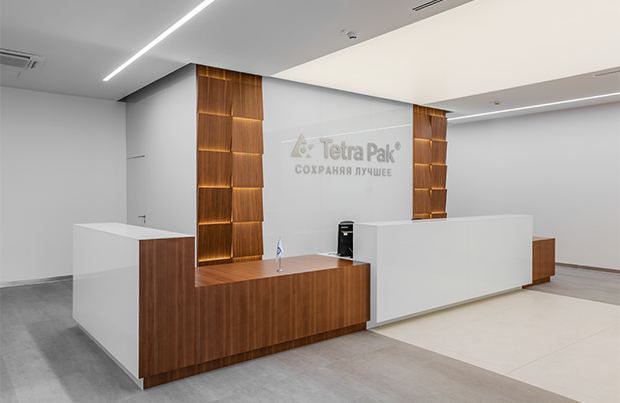 27 june 2014 MOSCOW ARCHITECTURAL REGATTA WAS HELD ON JUNE 21, 2014
For the first time, in the framework of the IV Moscow Architectural Regatta, the First Moscow Championship among Architectural studios was held.
15 july 2014 KASPERSKY LABORATORY HAS WON AGAIN!
The Kaspersky Laboratory office, designed by ABD architects, won in the nomination Office interior (Russia) in the INTERNATIONAL PROPERTY AWARDS 2014!
1 august 2014 NEW SPACE FOR ROSATOM
ABD Architects Bureau also worked on concepts for the interiors of laboratories in the contest "New Space for Rosatom".
Sport IT Business centers Moscow Office interior